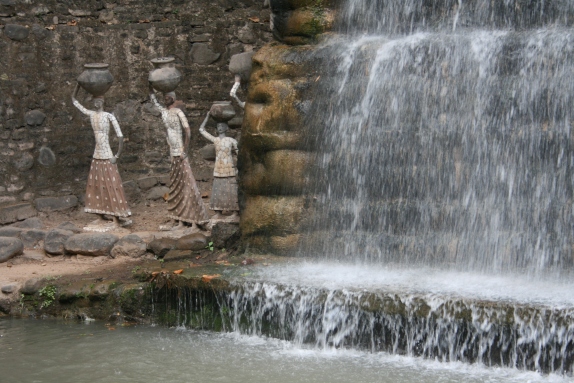 I adored the Nek Chand Rock Garden as will any seeker of quirk. It is a delightful sculpture park built entirely out of junk and one man’s idiosyncratic vision. 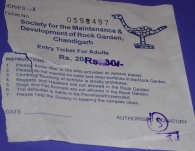 This contemporary-sounding project began as long ago as 1957, and has an interesting back-story.

Nek Chand was a lowly transport official when Chandigarh, the capital of Punjab and Haryana, was being built. He started collecting rubbish from the villages that were being pulled down to make way for the new city. He used pebbles, rocks and other materials to make a small garden for himself in the forest. As the project grew, he worked secretly at night to hide his activities from the authorities. Meanwhile, 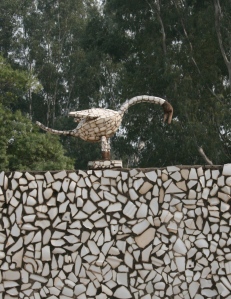 new construction methods involving reinforced concrete were being used to build the centre of Chandigarh and Nek Chand drew on them to create his own structures, spaces and humorously quirky sculptures. It was ten whole years before inspectors finally discovered the secret kingdom he was making!

At first they wanted to destroy it, but soon they had a change of heart and gave him not only the site, but also some labourers and even a salary so he could carry on with the work. Nek Chand eventually became a national hero, and his Rock Garden one of the most visited tourist sites in India. He died in 2015.

The gardens are a wonderful contrast to Chandigarh itself, which was designed by Le Corbusier to have wide streets and a regular grid pattern. In Nek-Chand-Land, everything is labyrinthine, with narrow, twisty paths, surprising views and hidden-away areas to discover. Doorways are tiny, making people stoop. And water-features appear everywhere. During my visit, signs telling people to duck their heads were in French, due to the recent visit of Francois Hollande. British PM Theresa May was expected next. 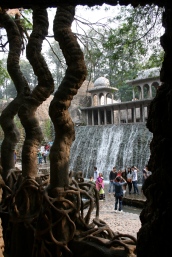 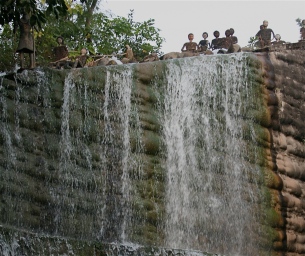 Most engaging of all are the thousands of statues made from junk: dancing girls made from old bangles; young boys made from broken plates and pots. Whole walls are constructed out of broken sockets or oil drums or pipes. The theme appears to be – well, all aspects of life…childhood, commerce, soldiering, physical labour, sex, child-rearing, fantasy, spirituality. Shakespeare would have felt well at home.

The pathways, as you explore this 25-acre site, are also lined with the animals and birds that live among us, and some imaginary ones that don’t. This is ‘folk art’ at its best – poignant, mischievous, insightful and surreal. There’s surely something in this garden to delight absolutely everyone. Me, I liked the monkeys best! 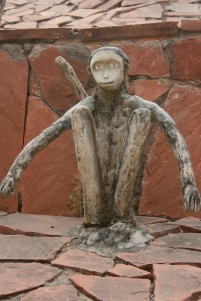 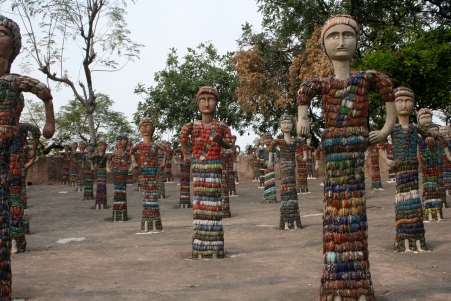 Scrapbooktraveller.wordpress.com helps fund a school in Mohali, near Chandigarh to educate children from a slum area. Any donations go straight into books, materials and school expenses – no overheads. If you can give just a little, it really counts for a lot. Help lift kids out of poverty: https://www.justgiving.com/fundraising/scrapbooktraveller